Siege and Storm was a major improvement to me, compared to Shadow and Bone. The reader is starting to see the character development grow and the writing become more intense. This Grisha Trilogy is 100% required before reading King of Scars! Nikolai’s character has the most visibility and development in this series.

As someone that started Grisha by reading Six of Crows first, I had no idea all the background for Nikolai. You’ll need it. The next duology is all about him. I’m beyond excited to get his story and Leigh Bardugo is going to wreck me. LOL 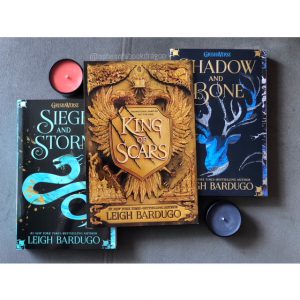 “Watch yourself, Nikolai,” Mal said softly. “Princes bleed just like other men.”
Nikolai plucked an invisible piece of dust from his sleeve. “Yes,” he said. “They just do it in better clothes.”
― Leigh Bardugo, Siege and Storm

Book two, what to say about it. It’s hard to give input and review with out spoiling things but I will do my best! Siege and Storm starts off by following just Alina and Mal. We get insight to how they do alone and then we’re THROWN INTO CHAOS. It’s crazy how much action is in book two. Book one was slow in places and was harder to get motivated to read. Siege and Storm did not have this problem.

We also get new characters in book two! Some of my favorites in fact. To list a few we get: Nikolai, Tamar, Tolya, and quite a few others that I’ll keep quiet on for now because I don’t want to spoil things. haha. Honestly, I find it interesting to see her progression of writing. You can see a clear improvement from book one to two and I’m so invested in the story.

So things I love~ The action! O.M.Goodness the action! This book is longer but the pacing is fantastic! (Hello, amazingness <3 ) I read this book in under 5 hours. I will say the beginning is a little confusing with all the moving parts and new items being introduced. So it may take some time to plow through the first couple chapters. This isn’t due to pacing so much as processing new information.

Things I’m not too fond of right now. The Alina and Mal relationship. Don’t get me wrong, I ship them. Even though I see most don’t like them together, I do. HOWEVER, Alina individually is infuriating and so is Mal. (Leigh does improve with character development in Six of Crows thank goodness). As much as I dislike them individually, they’re mildly better together. Which I think is why I enjoy the side characters so much right now. I have yet to meet a side character I dislike. 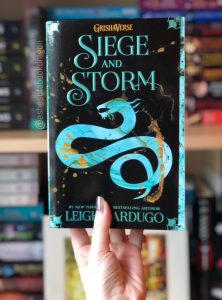 “Why won’t you leave me alone?” I whispered one night as he hovered behind me while I tried to work at my desk.
Long minutes passed. I didn’t think he would answer. I even had time to hope he might have gone, until I felt his hand on my shoulder.
“Then I’d be alone, too,” he said, and he stayed the whole night through, till the lamps burned down to nothing.”
― Leigh Bardugo, Siege and Storm

The Darkling is by far the best developed character. Leigh Bardugo has created a villain that is dynamic and tragic. I do have the urge to snuggle him although he’s clearly a sociopath. hahahah I’m not sure how this trilogy ends but I would love to see a Darkling book about his back story. There’s so much Leigh can elaborate on and I’m sure a bunch of us would be interested in it. His growth in this book is amazing and where I know he’s a villain and crazy, a part of me hopes he gets a somewhat happy ending? (I don’t think this will happen at all, but I’m allowed to dream…..)

Overall Siege and Storm is a good second book to the series. There were no ‘slow’ moments that I could see and the writing clearly improved. I can only assume that book three will also be better.

I would recommend this series to anyone that likes action packed Young Adult. I realize it’s fantasy but it feels like so much more than that at this point. There is still a touch of romance in this book but nothing that’s a main focus. It’s more of your typical fantasy book side note. 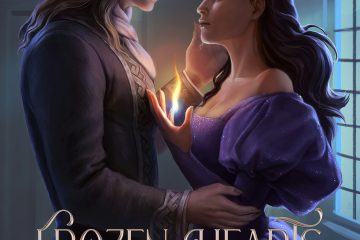